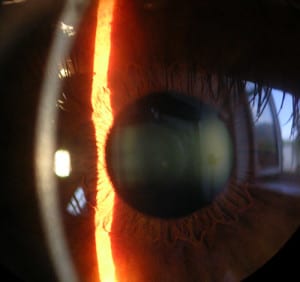 Eyeballs are like slimy orbs consisting of different parts which tend to expand and contract depending on the availability of light. Recently, a huge discovery was made by scientists at University of Nottingham, U.K where they found out a new eye part.

The new layer of human eye has been named Dua’s layer after its discoverer, Prof. Haminder Dua. Before the discovery of this new layer, it was believed that the cornea was made of 5 layers. The thickness of the Dua’s layer is approximately 15 microns and is the 3rd layer from back of cornea. The discovery is expected to provide a new direction to ophthalmology field and help in further advancement of studies related to the human eye.

The discoverer of this extremely fine layer, Prof. Harminder Dua stated that textbooks related to ophthalmology will need to be re-written. The cornea’s back is affected by many diseases and clinicians from every corner of the globe have already started relating them to tear, presence or absence of this layer.

The transparent layer present in front of human eye is known as cornea and the thickness of this layer is about 550 microns as compared to meagre 15 microns of Dua’s layer.

Tiny air bubbles were used for separating different layers of cornea. Electron microscopy was used for studying the layers where viewing of one thousand times normal size is possible. This huge discover is expected to create a new revolution in ophthalmology field and allow surgeons to understand different diseases like pre-descemet’s dystrophies, descematocele and acute hydrops.

The recent discovery has also led to the belief among scientists that keratoconus, which is an eye disease that causes the cornea to become cone-shaped and bulge outwards is caused by tear in Dua layer.

Understanding the location and properties of this new layer will assist surgeons towards the identification of the place where the bubbles occur within the cornea and accordingly take the necessary precautions during operation. Apart from that, the research will also help in understanding of eye evolution’s early stages. This will be a big boost towards other researches in the field of ophthalmology as it will help in better understanding of the entire development process of human eye.

The Dua’s layer discovery will help in making eye surgeries more precise and safer and the rate of success of corneal transplants and grafts are more likely to get increased.

Scientists have already hypothesized that evolvement of human eye happened from uncomplicated patch of cells developing on some primitive animal’s surface. The cells gradually grew in complexity which led to the addition of neural connections to brain, a lens and pigmentation. All these discoveries in the field of ophthalmology happened only after the discovery of 2011.

Discoveries like these are a clear indication of the fact that even though huge attempts are being made to unravel the mysteries of the universe, there are still lots of things yet to be discovered ithin the human body itself.