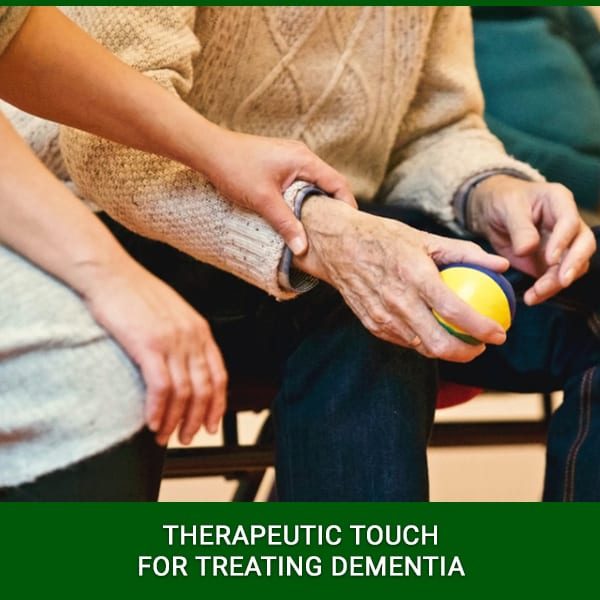 Due to the limited effectiveness and some unresolved safety issues in the traditional treatment of Alzheimer’s and other kinds of dementia, various researchers are considering different alternatives and complementary medical approaches called CAM that is aimed at improvement in cognition and memory, and decreasing the agitation that you normally associate with dementia. Here we will review an energetic alternative that is widely used in nursing homes called therapeutic touch.

There are normally two kinds of touch therapies used for the treatment of dementia viz. healing touch (HT) and therapeutic touch (TT). Therapeutic touch is based on the principles of energy medicine where the healer can influence the patient’s energy field causing advantageous emotional and physiological changes. The therapeutic touch practitioners normally do not touch the patient directly. Some double-blind trials and open studies suggest that both these techniques are beneficial for agitated individuals suffering from Alzheimer’s disease and some other kinds of dementia.

Studies for establishing the credentials of dementia treatment by using TT

Therapeutic touch is commonly accepted by medical professionals as an effective and appropriate treatment for agitated individuals suffering from dementia. Some recent studies also support evidence for the advantageous effects of therapeutic touch on decreasing agitation in individuals suffering from the disease. In another double-blind study added mock TT within a control arm and demented candidates suffering from agitation were randomized for receiving mock therapeutic touch treatment every day for three days. People that received the genuine TT treatment exhibited significantly lower symptoms of dementia. They displayed less restfulness and fewer disruptive vocalizations than compared to individuals that received mock TT treatment. The problem is that this study lasted only for three days and it is impossible to generalize the findings of long-term advantages of TT for treating agitation in dementia patients.

Therapeutic touch, healing touch, and therapeutic massage are commonly used for decreasing agitation within individuals suffering from dementia in nursing homes. Even though several studies have indicated that there are beneficial effects observed by using all three lines of treatment for the condition, the significance of these findings is limited to various design flaws that include lack of blinding in several studies such as the advantageous confounding effects of continuous human contact.

Another problem was that just a few patients were enrolled for the studies and this leads to a lack of standardization for measurement of outcomes. The sham control groups using mock TT were also absent in some studies. What is required is large methodological and rigorous studies that include standard outcome measures and mock treatment arms are required for further investigating the advantages of HT, TT, and therapeutic massages for the treatment of agitation in individuals suffering from dementia.

Results of most of the studies conducted to confirm the effects of TT on dementia patients show a reduction in restlessness and a more nonaggressive behavior during the period of intervention. However, not long after the TT studies were finished, they pointed to the possibility of daily TT sessions for maintaining these improvements. Most experts conducting the studies have noted that it might be significant to hone in on the different effects of TT on people suffering from various kinds of dementia lying within different stages and severity levels.

But most results of the current studies are indicating that TT might be beneficial for the treatment of common agitation such as restlessness, vocalization, and wandering. The results of the study also indicate a requirement for categorizing the different individuals with subtypes of dementia and severity levels. It also emphasized the need for using a larger sample size and reduced inconsistency in methods used for recording the change in symptoms during future studies.

When you are ready to take a proactive stance against dementia by getting therapeutic massage and if you live in Clearwater & Palm Harbor, FL area get in touch with Maria’s Professional Massage. Maria has several years of experience and had professional training.