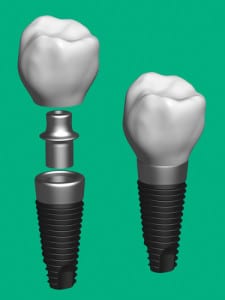 Records show that the Mayans were the first ones to successfully carry out dental implants.  It is almost 1350 yrs before work on titanium even got started by P I Branemark. Archaeologists, during an excavation process in Honduras in the early 1930s, got hold of a mandible piece of a 20-something year old woman originating back to the Mayan civilization.

This mandible showed three shell pieces in the shape of tooth positioned into three missing sockets of lower incisors. For over 40 years archaeologists considered this being part of a ritual, relating it closely to what the Egyptians used to do after a person dies. But in 1970, Brazilian academic Amadeo Bobbio, after carrying out several studies of the fragment concluded that these dental implants were carried out when the woman was alive.

Cambridge University researchers conducted an experiment in the early 1950s to analyse the blood flow in vivo. A method was devised by them by constructing a titanium chamber and then inserting the chamber into the ear-tissues of the rabbits.  Swedish surgeon Branemark showed his interest in the healing of bones and their regeneration.  Branemark adopted the procedure conducted by the Cambridge researchers and used it himself on rabbits. After few months, he tried to retrieve those chambers from the specimen’s body but to his astonishment he found out that the titanium had got tightly engulfed by the bone.

In later years, similar experiments were carried out by Leonard Linkow and Stefano M. Tramonte. Linkow went on to publish 12 books on this subject, whereas Tramonte’s work got published in 1966.